Discussions of VALIANT art, artists, and the creation process. Share your latest acquisitions,
or find help in learning about original art.

Personal GRAIL achieved. So, a short story. I met with Dinesh and Andy Liegl for drinks in downtown LA, before Matt Kindt's X-O #1 was announced, to discuss how I was going to be involved in making it what it became, the biggest indie release of that time. Dinesh showed me a cover to the first issue and I screamed "Call Lewis, I want this NO MATTER WHAT!" to which he replied, SORRY, Jesse Izdepski beat you to it. To say that I cursed Jesse out right there at the table is an understatement of the week. Later I congratulated him on what I think is the most iconic X-O cover of all time, and made him promise that if he EVER EVER wanted to part with it, I would get first dibs. Well, this week, that time has come. Thank you, Jesse, for being a stand up guy, I owe you one for sure. My collection is probably complete for now, I don't see myself buying anything better than this. There are a couple of covers that I am on the lookout for but between this one and Mike Choi's amazing cover that I also got from Jesse, I am super content to make it a day.

BTW, that meeting resulted in something truly special, the one and still only retailer edition with exclusive content inside the book, plus a metal signature plate, which was produced by valiant, and is still one of the rarest things VEI has ever produced (30, I believe) with our exclusive cover on it. I own 2 of those. It was also the single biggest buy of a comic book in my 26 year history and was a pretty sizable percentage of the total print run on that book. I now own the Cover A and my Exclusive cover, so I am good! 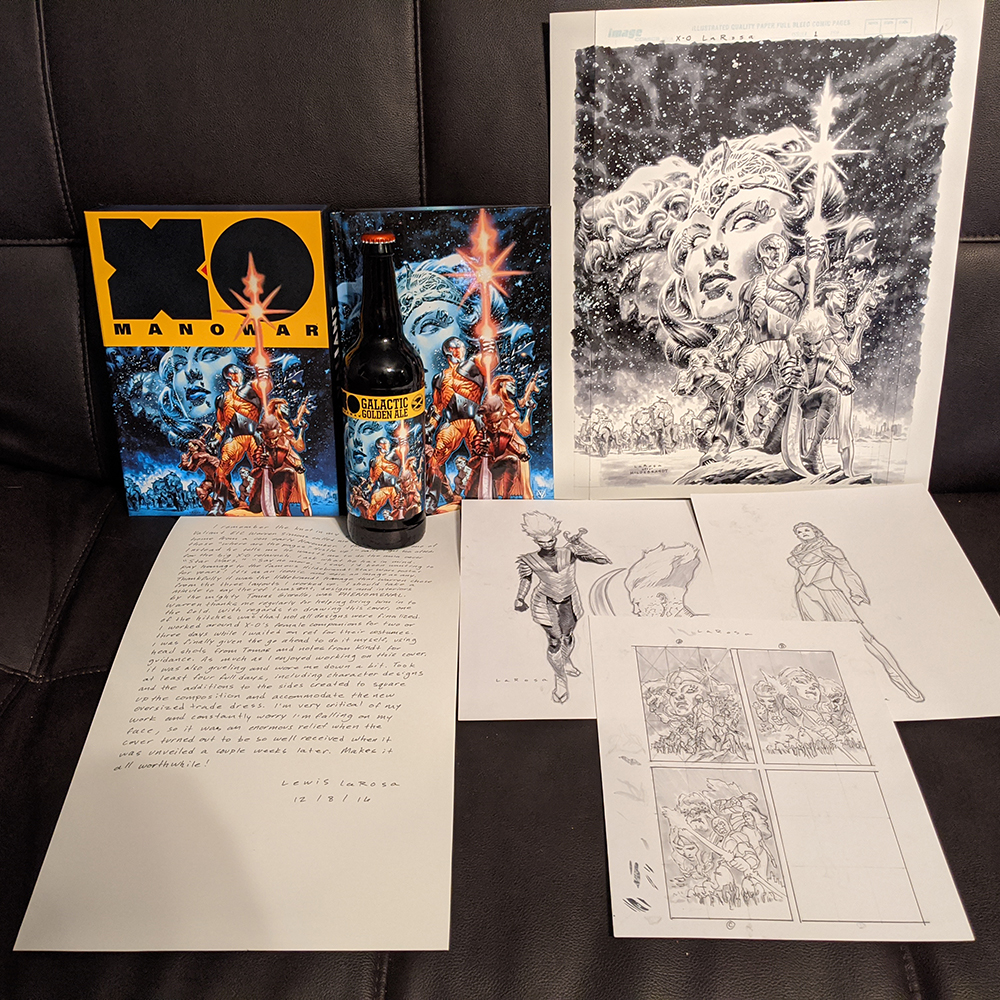 magnusr
I would hang a left...

Reading posts like this makes me happy. Well done both of you.

Wow, fantastic addition! And Jessie does a great job capturing and documenting its creation, glad to see he passed along those process artifacts!
Top

Congrats to you both! It's definitely a beautiful piece!
Top

grendeljd
innerSPACE does whatever I tell them

I'm amazed that DBS let go of that!
I like to draw stuff... http://grendeljd.deviantart.com/" onclick="window.open(this.href);return false;

My wife likes to draw stuff too, and she is better than me! [I'm very proud of her]... https://www.facebook.com/pages/Sara-Dec ... ref=stream" onclick="window.open(this.href);return false;
Top

greg
The admin around here must be getting old and soft.

geocarr
Those responsible for those remarks have been sacked.

That is fantastically awesome sauce!!!!
***Support your local farmers!***
Top

tarheelmarine
Ask me about the Mellow Mushroom

Congrats. That is one awesome cover.
Top