Some of you may recall that I am a long time STP / Scott Weiland fan. And so, I have a small music autograph wall in my office that I am re-arranging and while looking for some examples of other displays online, I stumbled upon an online seller's website called The Autograph Collector's Guild.

I thought "oh cool, I'll check this out" and the first thing I did was search for STP stuff just to see what might be there. Page one had some guitars, page 2 some signed album covers (including some neat signature of the "No. 4" album, which I thought was neat). But then I got to page 3 of their STP listings and saw this.

I swiped the image below from the page soliciting this fraudulent autograph for sale on The Autograph Collector's Guild website: 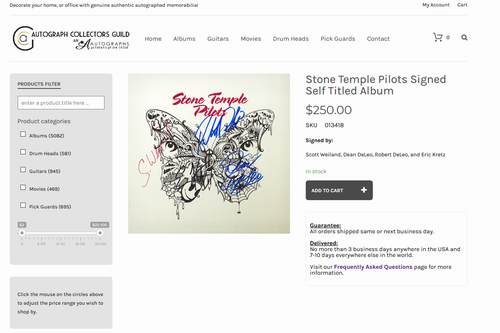 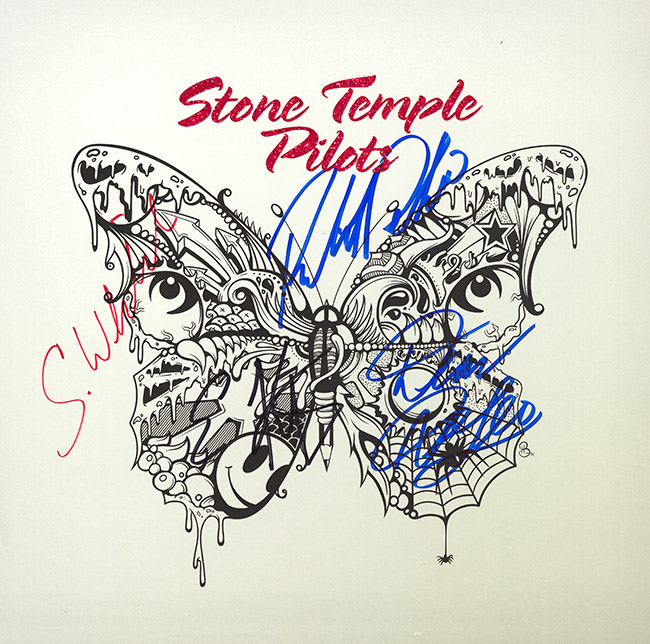 For those who don't know about this band, Scott Weiland was the lead singer of the Stone Temple Pilots & Velvet Revolver & Art of Anarchy as well as several solo gigs, lastly with the Wildabouts. Scott Weiland died on 12/03/2015. STP's Self Titled "Butterfly" album was released with a new singer on 03/16/18. And so, if anyone here is an autograph collector, beware of this website.
Last edited by IMJ on Mon Jan 07, 2019 8:11:25 pm, edited 1 time in total.
Instagram
eBay
Top

The admin deleted my post after he read it and couldn't understand it, citing that it had nothing to do with Indiana Jones. So I called him out on not reading the thread, noting that the post was designed to help the autograph collectors of the group. Then another "autograph collector" told me that my post in their group was a "cry for attention" and made no sense that I posted it.

Thanks for flagging the interesting story. Online groups are funny, and often so insular. I left a hobby site after many years because of the crazies.
Top

nycjadie wrote:Thanks for flagging the interesting story. Online groups are funny, and often so insular. I left a hobby site after many years because of the crazies.

I encourage everyone to somehow find and watch the "Indy Fans: The Quest for Fortune and Glory" documentary. It becomes a parody of itself within five minutes yet has the most serious of intent. 79 minutes unfold before you, accomplishing absolutely nothing while also revealing itself to be an Indy Fans documentary about making an Indy Fans documentary. The filmmaker, a 30, 40-something year old Indy-gear-wearing narrator, delivers his most serious and intellectual showing that he is just like Harrison Ford. By the end, no one of importance speaks with him and the crew winds up at a film festival on-stage telling the crowd that they are making an Indiana Jones fan documentary, and that they are going to be in it. The crowd cheers and they edit this announcement and crowd cheer into the documentary therefore documenting themselves making a documentary doing absolutely nothing.

If I recall correctly, they go on a Disney roller coaster ride at the end, and the documentary apparently emerges victorious.

It's been a while since I've seen it.

But either way, I encourage everyone to watch it the way that everyone basically must watch "The Room", but also because deciphering all of the nuances of what went into making that fan film basically yields accurate insight into many of the Indy Communities as I have experienced them. I am a huge Indiana Jones fan btw, a statement of truth which I've just added to make this post even more incredibly confusing for everyone.

As for the autograph thing? Ya, beware anything you might buy that is associated with that place. They are selling autographs of deceased people on things that weren't made until years after they had passed.
Instagram
eBay
Top

Alternative Nation picked up on this from the Below Empty site and cites my post, which I thought was cool.