Discussion of all "slabbed comics" whether Valiant or not

I’m a Valiant slab collector but haven’t expanded my purchases to Signature Series slabs. For those of you who do collect SS, is there a general rule of thumb on the premium you look for for a 9.8 in SS? That is, if there is a good, known history of sales prices for a blue label CGC 9.8 for a specific book, the premium (fixed $s or %) that is reasonable for the same book in a yellow label CGC 9.8. Thanks for the thoughts.
Top

I tend to avoid SS slabs as I prefer my comics to not be defaced except in very rare circumstances, but I know most people feel the opposite of me.

That said I do not think there is a rule of thumb you can use. It really depends on who is signing and in some cases how many copies of a book they have signed. Bigger name creators or creators who are known to hardly sign command much bigger premiums than lesser known creators or prolific signers. Also it seems to impact keys more as well.
Top

I agree with Magnus. I don’t think there is a rule of thumb when compared to blue label.

Personally, I value the blue label over yellow, even though the grading costs are higher. However, I do have exceptions. I have a couple Frank Miller signatures that I paid a premium for, or a few keys. I tend t only be interested in a SS after I collect a blue label. It’s more like an addition to the collection, instead of in lieu of. For example, I didn’t start collecting them until I had all the pre-Unity books in 9.8. How do I enhance the collection? SS of course!
Top

nycjadie wrote: ↑
Thu May 28, 2020 9:54:55 am
I tend t only be interested in a SS after I collect a blue label. It’s more like an addition to the collection, instead of in lieu of. For example, I didn’t start collecting them until I had all the pre-Unity books in 9.8. How do I enhance the collection? SS of course!

Yes, exactly. I have a number of 9.8 blue labels now and am starting to look at yellow labels for cover artists I really like. I hear you on it being about the artist. For example, I am dying to find some BWS 9.8 SS of classic valiant issues. They are very hard to come. I never see them.

However, after all the Shooter signings on key classic valiant books, I thought there would be some avg premium you could come up with when look at a popular book.

Still on the fence about CGC SS labels. The virgin covers from artists I like are the books that tend to attract me for a SS label.
Top

geocarr
Those responsible for those remarks have been sacked.

My only BWS SS but I love it! And I did pay a premium for it. No regrets though. 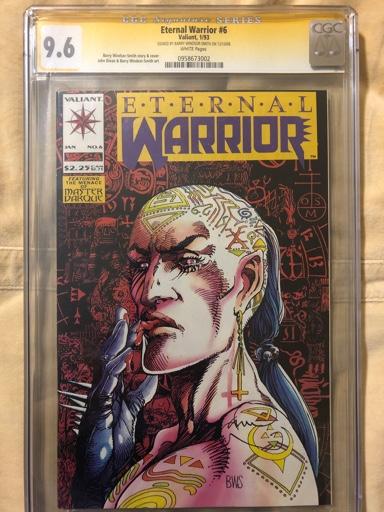 I love my SS books, but then again, I don't really sell many of them.

-The Valiant #4 1:50, an already expensive book when 9.8. Mine are SS because Lemire and Kindt were at the same Con at the same time.
-I proposed to Kindt with his XO ring (then twitter sent it to his wife, she loved it!) Got the books signed by him too.
-Lemire's first signed Bloodshot Reborn Gold, when he said he hadn't seen a BS Reborn Gold before, and Dinesh swooped in to make sure he understood what he was talking about. First signed Gold 9.8
-Bought a few VH1 books, cuz Shooter was coming to a local Con in my hood. Didn't know what to expect, but found him to be awesome and quite a warm person. Movie talk, script talk, he wouldn't rush a soul! Every book I had him sign, reminds me of that moment

I also collect SS for my CGC Registry. While I may not sell those, many of those signatures probably won't move the needle much, except for certain Valiant fans

I would much rather have signatures on them, but would I sell them? That's tough, but I would imagine getting Lemire and Kindt on The Valiant #4 1:50 would up the price a decent amount. Same with the VH1 books, a 9.8 EW Gold Flat with Shooter's signature on it would fetch a little more than not, I would imagine. Would I buy them? yea, I think I would. Especially if it's a book I want/need, it's a 9.8 and it belongs in my Registry.
Moose
Top

Sent from my iPhone using Tapatalk